Emily Lazar, better known as September Mourning, found some free time to sit and chat with Noisy Cavern's Marla Farias during Saturday's NAMM convention in Anaheim, California. The two discussed Lazar's music, comic book, costumes, busy lifestyle, and activities she enjoys when out of character. September Mourning has done extensive touring throughout the states, and is preparing to go out on tour again in March. Her trans media dark-culture is definitely feeding the frenzy of her very own "Children of Fate".

Marla: What do you do to relax or wind down?

September: Yoga (laughs). Breathing exercises (laughs). Well at NAMM, it’s a little bit crazy here and you know how it is, this is my fourth hour of press now (looks down at her phone) so I’m kind of getting a little tired. But, it’s good when I’m off and on the road. Doing yoga really helps me, and meditation and things like that, I think a lot of successful people do meditation, and it really helps me focus.

Marla: How have you been enjoying your time here at NAMM?

September: I think it’s a lot of fun. I just came for the day today and it’s really cool to see a lot of people and to see all of our endorsements. Those are the people that really believe in the project and give us gear to use on the road. It’s very important to cultivate those relationships.

Marla: What can you tell me about your project?

September: So, “September Mourning” if you don’t know anything about it, is a transmedia project. It’s based around a storyline and a comic book series that I wrote with Marc Silvestri of Image and Top Cow Comics. You’ll be able to get the actual comic books - the physical comic books - in comic book stores all around the country very soon. It’s going to be distributed through comic book stores and we’re very excited about that. But, for those of you in the know, you probably already got them on tour because we’ve disbursed two of them on tour. One is called “The Murder Reapers” and the other one is called “The Hand of Fate”. The story revolves around September the main protagonist, she’s a super reaper hybrid that was transformed because another reaper was sent to take her life. He fell in love with her and didn’t want to take it, so he gave her these powers and she becomes this super reaper hybrid that doesn’t remember any of her life before. She has this innate like feeling that she has to collect these souls, but she doesn’t want to just collect them and feel all their memories, their feelings, and emotions, she feels like they have other things to do in their life and she doesn’t want to just kill them off, so she starts swapping them with good ones as she feels with the bad ones and giving them a chance in someone else’s body. This toys with fate which is personified as a character in the comic books, and fate sends all of these reapers to get her and begins a big war between the living and the dead.

Marla: Does the music enhance the comic book?

September: Yes, the music is the soundtrack to everything.

Marla: What usually comes first, the music or the storyline to the comic book?

September: The storyline came before the music even started. The whole transmedia project fate is based off of that storyline, so the music came after we had written the first two comics. Then volume II, which is our first real album on Sumerian Records, was released in tandem with the two comic books.

[Music can be heard playing right outside of the press room]

Marla: Which booths have you visited today and which have sponsored you with products?

September: Yeah, Sennheiser is an endorser of ours; they provide us with microphones and wireless stuff for our guitars and vocals. We’re endorsed by Korg, Sennnheiser, Ultimate Ears, Schecter guitars, PRS guitars, there are actually a bunch of them.

Marla: Have you seen anything new here, any new gear you’re interested in?

September: I’m not really a big gear person because I’m a vocalist, but I do look at plug-ins for vocals. I’m not a recording geek like that but it is interesting to go around to the booths and kind of look at the vocal plug-ins and the new ones that producers are coming out with.

Marla: Are you going on tour anytime soon?

September: Yes, March 1st. We leave with Combichrist and Dope, and we’ll be all over the country for about three to four weeks with them. We’re very excited, it’s going to be an amazing tour.

Marla: Will you be releasing any new albums anytime soon?

September: We will be releasing something probably in the middle of the year - Volume III.

Marla: How long does it usually take you to complete a piece of music and a comic book?

September: It just depends on the writing process and how much touring we’re doing because when we’re on tour it’s very hard to write. Obviously, when we are at home we do definitely use that time to get writing done and get things solidified.

Marla: Do you do the writing?

September: I topline everything which means I do the vocals, the lyrics and the melodies. The music is written by my guitarist Riven. My other guitarist, Shadou, is also writing some things for us and we usually go in with another producer/writer that helps us craft everything together.

Marla: How did you and Marc Silvestri meet? Was it really on My Space?

September: (laughs) Way back. We met way back in 2009 on myspace and I just messaged him and was like I have this really cool transmedia idea that I wanted to do with a comic book thing, would you mind if I called you or you call me or could I just pitch you this idea. It was a really random message and he was like sure why not and I got a meeting with him. Our meeting ended up being a six hour dinner in New York and we talked about how to make this happen, how to craft the story with the characters and how to incorporate the music and make it all one thing. It’s taken awhile to incorporate everything and write everything, but now we’re at the point where we’re touring and everything’s culminated. We worked together and it just happened organically.

Marla: How did you come to be interested in combining comic books with music? How did that idea come to you?

September: With various websites, the internet, and the way social media was affecting music, I figured that it would be more interesting as an artist to tell something across different platforms. I didn’t just want to write a novel, I wanted to tell a story across different platforms that included music and I wanted to do something that was visual and I love comics because I’m a very visual person, and if you’ve seen any of my costuming or anything like that you’ll realize it’s very visual.

Marla: Do you make the costumes yourself?

September: Yeah, I design them with my friend Eirik Aswang and we craft them with each other. It’s a very hands on sort of thing.

September: Yeah, we have the music and the comic books coming out. We also have the videos and album three, volume III coming out. There are a couple of other things that I really can’t say right now, but a lot of other media things in the works that I’m trying to get developed that I really hope come to fruition at this time.

Marla: Do you have any other creative projects that you work on during your free time?

September: It’s all kind of incorporated into September Mourning. If you have a good story, you can tell it on so many different platforms and I’m very lucky that this story is kind of like that. People have really liked it and they really like the character. They really enjoy that she’s this reaper, but she’s really not a reaper like the one everyone talks about, like a grim reaper, she’s different you know and she’s her own character.

Marla: What makes her different?

September: Well, because she’s a human reaper hybrid, she can swap souls. She can take a soul’s life and put it into another person’s body which normal reapers can’t do, and that can basically give life in a way. Also, since she is part human, she has that humanity, that passion and that emotion. The feeling of wanting to give these souls redemption - so that’s a little bit different. Usually reapers are just like harbingers of death, they’re like soldiers of death, but she’s not that, she’s very different.

Marla: So what do you do during downtime?

September: (laughs) What downtime? I sleep, I like movies, I love reading comic books and regular books. I do like hanging out with friends and I love sitting by the beach at night. That’s a big pastime of mine, I have a spot and it’s kind of secret that I always go to.

Marla: I know, you work hard so you have to have some alone time.

September: I really need a lot of alone time because that’s the time, that’s when I think of things and when I have the creative process really come into fruition.

Marla: What is the message of your music?

September: Well, the whole storyline and message behind it is of empowerment. It’s a very positive message. It started with this death and with these reapers and all this sort of dark stuff, but there’s this hint of light in it that you can’t really see unless you look at it on a dark landscape, and since it's a very dark landscape, it’s set on a September morning. You realize that she is hope, that she is hope for these lost souls but she’s not what really gives them strength. What she ends up realizing throughout the books and what I hope that our reader realizes is that the strength comes from within. That you know your savior, and you can’t reach outside for people to save you, like there’s no messiah. You are your own savior and you are your own strength, your own powerhouse and our hearts and our minds are so powerful we don’t give ourselves enough credit. I think that’s the message, the realization in just knowing your inner strength.

Marla: I read on one of your websites that your project is about being courageous and not letting fears get in the way, can you elaborate on that?

September: That’s the idea of it, to have courage and inner strength and not let yourself be deprecated by fear or anything that’s an outside source. It’s like you craft your own world, and I think that’s really important.

Marla: Is there anything else you’d like to add?

September: I’d just like to thank all of our fans, our “Children of Fate” as we call them, for standing with us through the album process and the creating of all this content and buying our product and supporting us on the road. Just for being so awesome, because they inspire us, all of you guys inspire us every day!

Visit the September Mourning website by clicking on the image above.

"Too Close to the Noise Floor" / Astral Cloud Ashes

Music For Your Soul

Who is "Nervous Vulpis" 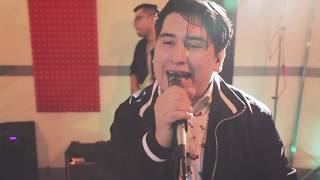 The Place on Rugby perform at Anchor Music Studios

The Riki Rachtman Radio show is making its return after a nearly 23-year hiatus. 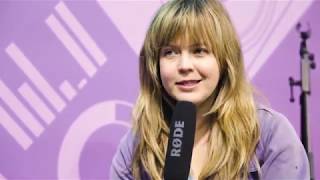 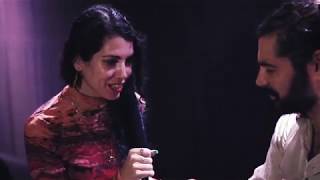